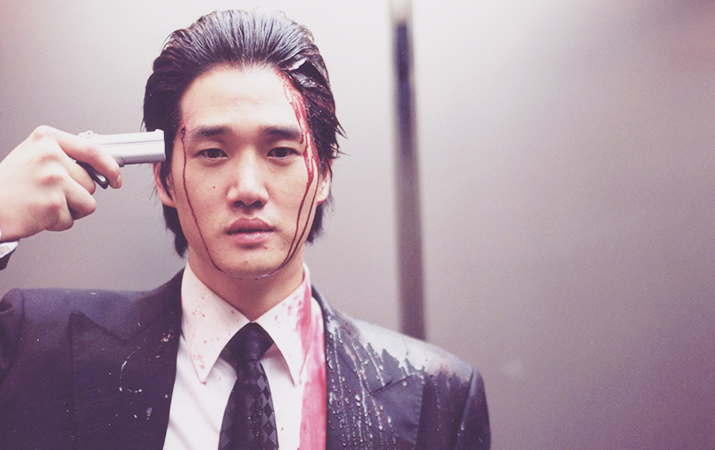 “Be it a rock or a grain of sand,
in water they sink as the same.”
WOO-JIN LEE, IN OLDBOY

The minute I decided to enter this challenge I knew that one particular movie needed to be in my list – Old Boy. It’s the film I get recommended the most, and being unforgivably unfamiliar with Korean cinema, this pick was a no-brainer. But knowing about it didn’t prepare me at all for its viewing: I expected a violent revenge tale, but what I got was a bloody comedy, a moving and disturbing drama, and then a violent revenge tale (and not from the character I expected it from). All in one beautiful – talk about striking cinematography – crazy, excessive movie that had me double-checking my reactions throughout. Should I laugh, be repulsed, or cry? Is it possible to do it all at once? It is!

The incest theme is both shocking and refreshing in an age where controversial material is so rare in movies – as if depicting equals condoning – and it is so cleverly done that you can’t help but be torn apart by mixed feelings. Also interesting is how we start with a hero and faceless villain, and in the end they’re both so equally miserable that they’re assigned roles become indistinguishable from one another.

It’s dark, twisted stuff and I shamelessly love it for that; in fact I believe Dae-Su’s crying in the end means the hypnosis didn’t work – that’s how bleak I like my movies.

food for thought
If PETA gave The Wolf of Wall Street so much grief over a goldfish being inside Jonah Hill’s mouth,
what would they say about the eating of four live octopuses?
Verdict
Having seen Stoker too, I’m ready for more from Chan-wook Park!
This is the year’s first entry for the Blind Spot Series.
These posts are a collection of first impressions, musings and loose thoughts – not reviews.