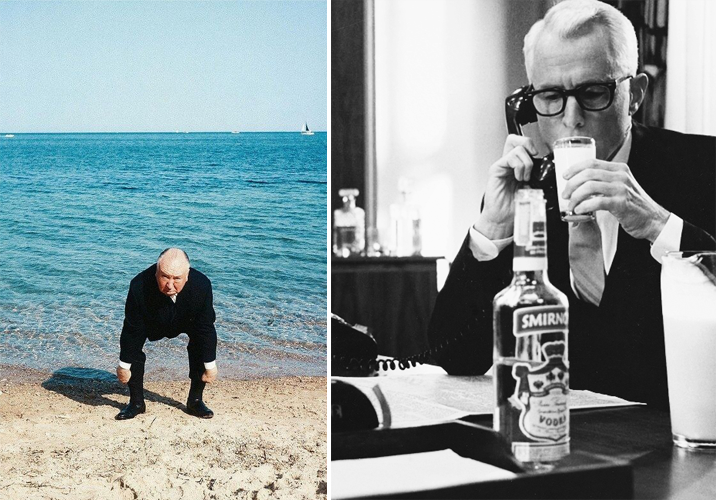 John Slattery is of course, by now, better known for his role as Roger Sterling in Matthew Weiner’s acclaimed series Mad Men; but if you’re curious enough to want to check out some more of his work, you can also see him as a guest star in shows such as Will & Grace, Arrested Development and Sex and the City, starring in lots of films from the 90s, and in two that I have yet to see – In Our Nature, and Bluebird – have you? Most promising though, is his recent feature-length directional debut, God’s Pocket (with an impressive cast that counts with Philip Seymour Hoffman, Christina Hendricks, Richard Jenkins, and John Turturro), after having directed five Mad Men episodes. I hope this means there’s still a lot to see from Slattery.

BORN ON AUGUST 13TH, 1889
I’ve written numerous articles on Hitchcock and his films now, and since I mostly write about what I like, it’s easy to guess that I LOVE this man. My least favourite film of his so far is Frenzy, and even this one was an eye opener when I first watched it.  I’ve checked almost all of his most acclaimed pictures, but there’s still some that I need to see asap, such as Lifeboat, Marnie, The Wrong Man, and The Man Who Knew Too Much.

As I watch more and more of his films it gets increasingly harder to rate a complete top 10, but this post on my Five Favourite Hitchcock Masterpieces still stands. They are Notorious, Rear Window, Psycho, North by Northwest, and Vertigo. To those I’d now add the deliciously dark Strangers on a Train, the haunting Shadow of a Doubt, the clever boy Rope, and the peculiar Dial M for Murder. Less powerful but still beloved are Suspicion, The Birds, To Catch a Thief, Spellbound, Rebecca, and Torn Curtain.

Here are some more Hitchcock-themed posts:
Hollywood Couture: Rear Window, The Great Recasting: Mr. Brooks (where I re-casted the average Mr. Brooks with Hitchcock as a director and some other classic actors), Great Villain Blogathon: Johnnie Aysgarth (from Suspicion), and The ‘Sons of Bitches’ Snubathon (where I rant extensively about his lack of Oscars).

WHAT DO YOU MOST LOVE ABOUT THESE TWO MEN?
AND HOW WEIRD IS IT TO SEE HITCH BLOW A KISS?