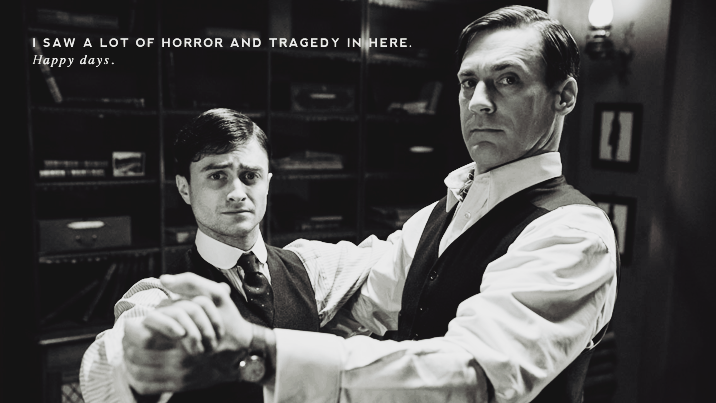 Here’s something you don’t see everyday.
Based on the works of Mikhail Bulgavok, A Young Doctor’s Notebook is an unusual british dark comedy about a doctor looking back at his times as a young man working in a small russian hospital, and struggling with a morphine addiction. The most unusual thing about it? It stars Jon Hamm as the doctor, and Daniel Radcliffe as his younger self. As far as radically different people playing the same part goes, this one takes the prize. But as it seems it is intentional, and even provides with some of the funniest moments of the show – like Hamm saying did I really use to look like that?

Another peculiar aspect that makes this miniseries quite brilliant is the fact that Hamm says that line while directly staring at his younger counterpart: present and past coexist and interact with each other in such a way that leaves us wondering not just what we would tell our younger selves, but how would we react to such an experience – would you like what you would see? 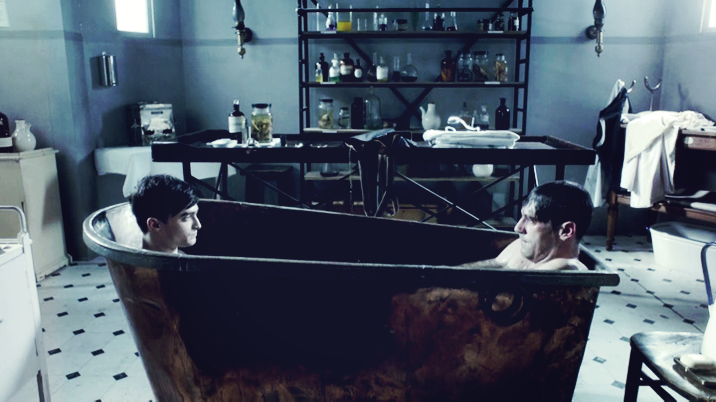 At first the series is charming and witty, with elements of gore and a very interesting dynamic between the leads. As it approaches the end of its first season, we get to know a bit more about the charming supporting characters, which are incredibly rich by the show’s end, but also get a sense of the more dramatic moments that are coming: the doctor’s morphine addiction is getting worse, and no matter how many times the present warns his past of the dark times ahead, the future is inevitable – that is the shattering statement of A Young Doctor’s Notebook‘s second season.

For all the hilarious and surreal moments throughout, I would never guess just how dark and emotional this series could become in such a short span of time. The mood changes in an instant, and before you know it, you’ll find yourself moved by the older doctor’s struggle to deal with who he was.

As season two plays out, the old doctor’s regrets and feelings of helplessness in the face of his younger self’s addiction (which he still has in the present), will slowly turn into anger and even force him to give up on trying to save himself. In one of the series’s most dramatic scenes, the young doctor hits such a new low that he propels his present self to say I tried. I tried everything, to like you, to love you, even to look at you. But I’m finished. You can go rot in hell. Jon Hamm delivers this devastating line with such disgust and sorrow that it honestly left me speechless.

It’s a real treat to have two fantastic actors such as Jon Hamm and Daniel Radcliffe working together. For all their differences they share a great talent for both comedy and drama, seemingly keeping up with show’s frantic mood swings with grace and ease. In just eight episodes, A Young Doctor’s Notebook gives you the warmest and coldest of feelings, but what doesn’t fluctuate is your sheer fascination for every single episode.

Suffer, because this is far worse.
It will take you to a lush meadow in the height of summer.
You will lie down in the soft grass, and bask in the sun and feel nothing but bliss.
And you will never want to return to this frozen piss hole in the snow.
– the older doctor, about morphine