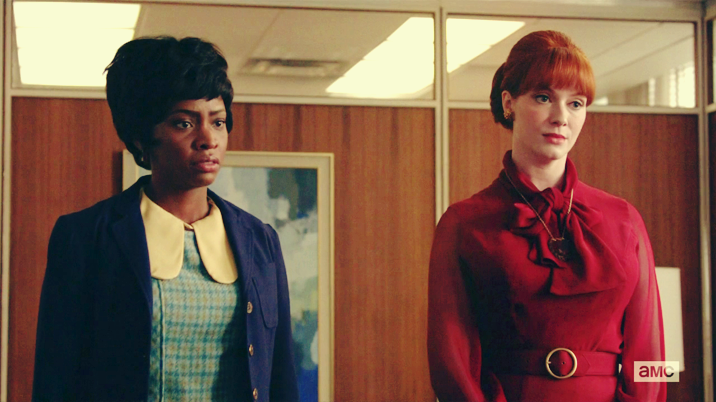 Directed by MICHAEL UPPENDAHL
Written by JONATHAN IGLA and MATTHEW WEINER
it’s Tuesday, my bad — Easter!
Like any man who has no reason to get up in the morning, Don stays in bed until noon. He watches TV all day, with only one bottle of whiskey, some crackers, and a cockroach to keep him company. As night falls, he cleans himself up and puts on a suit, beginning to look like the sharp Don Draper we once knew.
This trimming happens for the sake of appearances, because Dawn (his former secretary) is coming over – she has become Don’s mole inside the firm, keeping him up to speed with what’s going on at SC&P, yet not well enough to satisfy Don’s need to be back at the office.
It’s this need that has him staying in New York while his wife is in California alone – he doesn’t even want to move, as Sally will note later. The truth is, this is bigger than Megan: Don Draper exists inside the tall cold buildings of NYC; without SC&P, there’s just Dick Whitman. And being honest (and drunk, granted) got him fired – this conflict between telling the truth or keep pretending, will be a motif throughout the episode. 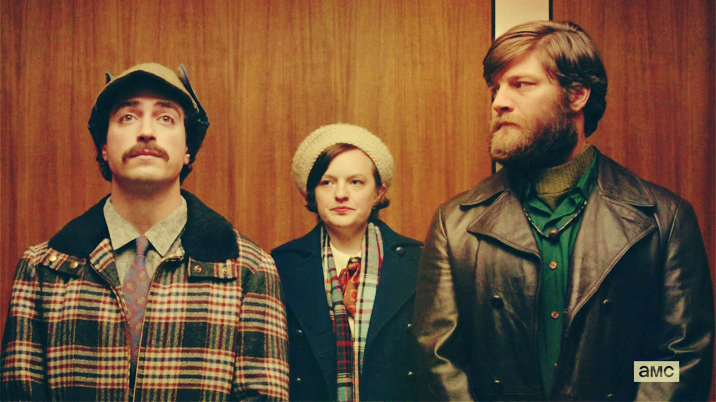 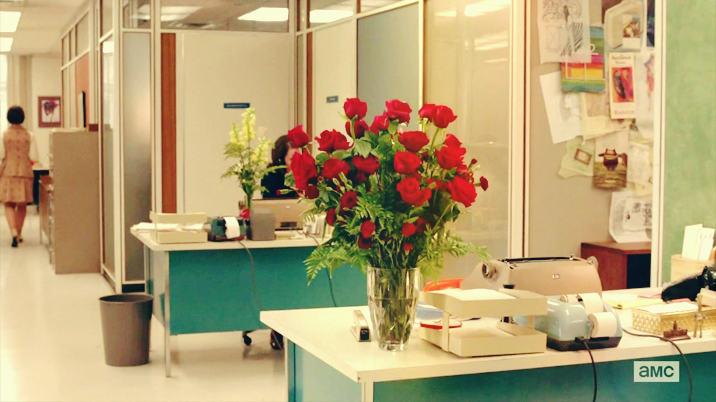 Meanwhile Peggy continues to suffer with Ted’s rejection. It’s Valentine’s Day, so Peggy immediately lights up when she sees a bouquet of flowers at Shirley‘s desk, mistakenly assuming that they’re for her when in fact they were from Shirley’s fiancé.

At this point Stan kindly notes: Look at you, every inch a girl. I totally ship them.

But her mood soon changes upon assuming (again, wrongly) that the flowers are from Ted. She spends the day in such a lousy state that she gets nothing done.

When Shirley finally manages to tell her that the flowers are not hers (after a long afternoon of hilarious misunderstandings), Peggy blames her own lack of productivity on Shirley, and asks Joan to get her a new secretary at once.

Now Joan was already pretty stressed out herself because Sally stopped by and found Lou in her father’s office (Don hasn’t told her about his leave of absence from SC&P), and Dawn wasn’t there because she was out buying perfume for Lou’s wife, which left Lou in a tough position (says he). And since Lou is a jerk, he also had Joan reassigning his secretary – not firing her because, you know, it wouldn’t look good.
So Joan places Dawn at the reception desk, but then Cooper is not happy, because people can see her from the elevator. His reaction to seeing Dawn in the front desk is priceless.
So after all of this, Jim enters Joan’s office and she immediately snaps. He kindly (and flirtatiously?) notes that two jobs is too much for Joan, and offers her an empty office upstairs, so she could be an account (wo)man full-time. 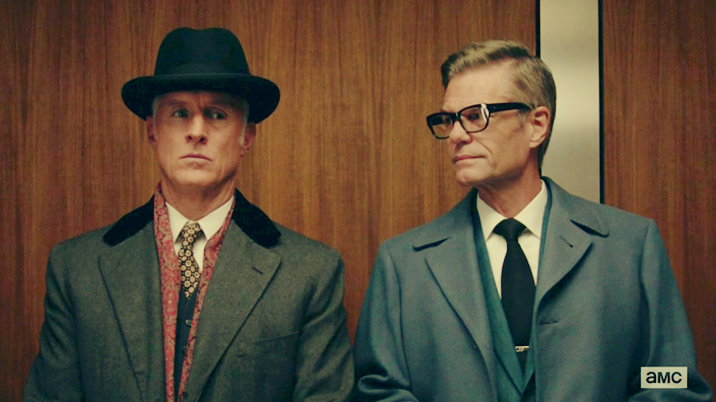 That’s when we see Shirley as Lou’s new secretary, and Dawn as the new Head of Personnel, who looked both excited and frightened as she installed herself in Joan’s now old office. This is a very important and interesting change, and I can’t wait to see how it turns out.

As Joan walks up to her new office, she runs into Roger. For the entire episode he seemed bored out of his mind, with no patience for other people’s crisis (including Pete‘s, on the left), and no strength to assert his opinions on business matters.

So Joan is carrying the flowers he gave her (remember, it’s Valentine’s Day), and tells him the good news: It was suggested that I move, now that I have some accounts, to which he replies, with a certain tone, Jim suggested it. Then Joan asks Do you disagree?, and Roger ends the conversation with Does it matter?
See, earlier in the episode Roger and Jim had a business disagreement, so that final reply could have something to do with it. Now in one of the final scenes, they share an elevator: I’d really hate to have you as an adversary, Jim says. In regards to the firm, or Joan too? 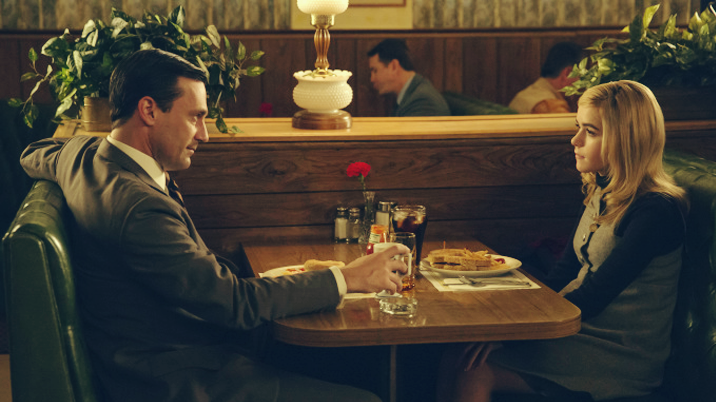 In the meantime, Sally went to Don’s apartment, and yet again caught him in a lie: he tells her he was at the office, she knows he wasn’t. But she doesn’t say a thing. Don gets a call from a concerned Dawn warning him that Sally was there today; he too keeps quiet. Now Don offers to give her a ride back to school. On their way, he tells her he knew she knew he was lying (ha) – why would you just let me lie to you like that? / Because it’s more embarrassing for me to catch you in a lie than it is for you to be lying. Ouch. But true.

She then has her own little meltdown about how hard it was to go to his apartment for fear of running into his mistress. It’s surprising and heart-breaking, and it reminds us that the Sally that says things like, I’d stay here till 1975 if I could get Betty in the ground, is not the real Sally.

Don stops for gas and dinner, but in reality, it’s all just an excuse to spend more time with Sally. They have a heart to heart about Don leaving the agency. He confesses, I told the truth about myself. But it wasn’t the right time. So they made me take some time off. I was ashamed. And now he doesn’t know what to do.

The conversation shifts and now Sally is telling him about the funeral she attended today. Don doesn’t want her going to funerals, but he ends up emptily saying, Life goes on. Her reply is nothing short of disturbing: I’m so many people. He turns pale; it’s like staring at a mirror. They finally arrive, and just before leaving Sally says through the window:
See Also
Uncategorized

Such a warm display of affection surprises Don, fills him with a bittersweet joy. This Will be Our Year, by The Zombies is playing in the background:
The warmth of your love’s
Like the warmth from the sun
And this will be our year
Took a long time to come