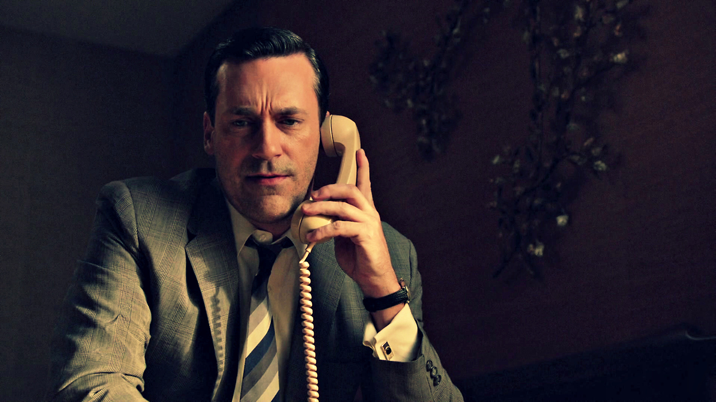 the following two episode recaps will also be posted on non-Mondays.

If the final season of Mad Med is about Don getting back in the game, Field Trip was his best move so far. After finding himself yet again wooed by rival advertising firms, our leading man finally finds the strength and courage to knock on Roger’s door (who expected him to answer?) and ask for his job back.

The two then have the kind of heated but honest and well-intended argument that can only happen between true friends – thus displaying the stellar dynamic we’ve been missing from these two. And just like that, after some truths and feelings are shared, Don has a job again. But in reality, this is more than that: he could have gotten a job sooner, in any agency; the thing is, he wants SC&P, the firm he built. However, that does not mean SC&P wants him back. 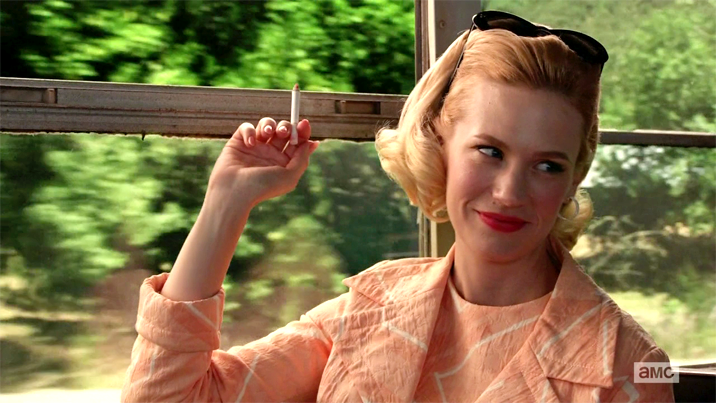 Meanwhile, one of Mad Men’s main characters appears for the first time this season: she’s the one we love to hate, Mrs. Betty Draper-Remarried. Don’s ex-wife may be keeping her figure in check these days, but she seems out of touch with the modern times of 1969. In fact, next to her friend, she looks old fashioned in both style and mentality (or maybe just jealous?).

Betty talks about the rewards of motherhood (which by now is like an inside-joke), and stuns audiences as she makes a conscious effort to repair her relationship with her son, Bobby: they go on a school field trip together, they laugh and share affectionate smiles, they even talk about monster movies (“We’re having a conversation!” Oh, Bobby). All is going swell, but this is still Betty we’re talking about, and Mad Men‘s are known characters struggle long and hard with change – so predictably, everything is ruined because Bobby traded Betty’s sandwich for candy; and for Betty, this is also a clear sign that he doesn’t love her.

At this point, Don is freaking out about going back to the office: he sits in his living room, waiting for an appropriate time to drop by (it’s 9h00AM  already, just go), with a dreadful look on his face. The scene is intercut with his actually arrival at SC&P, and if the anguish he felt was from imagining the worst possible scenario, I doubt he thought of such a nightmarish welcoming.

The first person Don encounters is, of all the people in that office, Lou Avery. Those few seconds when Jon Hamm is looking around, standing behind the man who is now replacing him, are not only hilarious but evocative — the way it was shot made me scorn internally “that’s right, he’s coming for you, you idiot“, while at same time providing the perfect setting for finally measuring up the two men: Don is well, Don, while Lou looks old and bland, with his unbuttoned cardigan and reading glasses on, bending over and completely unaware of Don‘s presence. But however inoffensive he looks on the outside, Lou‘s douche-bag ways remain intact. Good news is, he’s completely terrified.

Just a few seconds later Don realises that Roger is not in yet. Turns out, maybe he should’ve stayed home for a little while longer.

Next up on the welcome-Don-carousel is Michael, who keeps it relevant with comments such as “Boy, you smell good“. We can only imagine.

He then promptly tries to get Don‘s input on a campaign, going to get the storyboards from Peggy. Learning that the Don Draper is in the building, she immediately gets up and walks to the creative room. Meredith follows her, Stan joins them. At this point they’re all staring at Don, each of their faces perfectly capturing what they make of his return: 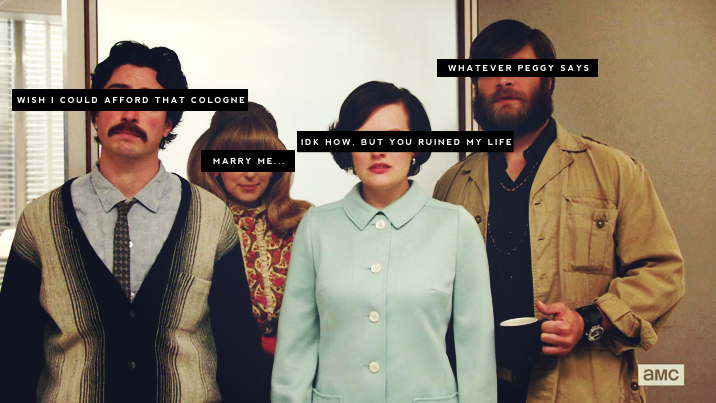 Ginsberg doesn’t care, Stan is apprehensive, Peggy shocked, then angry, and Meredith is drooling all over him. Then it’s time for Joan (who is weird and fake-nice) and Ken, who acts like every Mad Men fan: oh my god Don you’re back! please look at a picture of my kid his name is Eddie and he’s on a carousel remember you’re carousel pick for Kodak? my, that was genius you’re a genius, OMG Don you’re back! Don’t ever change, Ken Cosgrove.

Finally Roger arrives, with a cut to a scene in Cooper‘s office, where Joan and Jim are also at. After displaying such a passive attitude in the last few episodes, it was nice to see Roger standing up for Don while everyone else was scraping for reasons to fire him: Joan says things are working, which is a joke.

Jim compensates the lack of creative excellence by saying Lou is adequate (just like Accutron is accurate, what a snoozefest), and tries to shift the conversation to Harry Crane and the need for a computer.

At last, Roger presents them with the possibility of facing Don as competition, and that seems to scare them speechless for now. 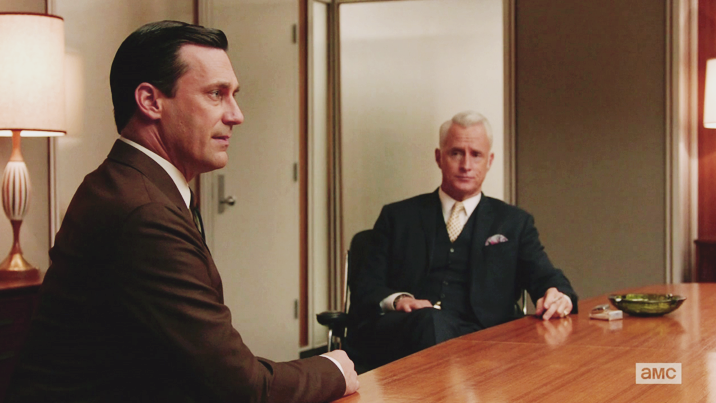 Meanwhile Don is still sitting in the creative room, a painful sight. Peggy comes in to push the knife a bit deeper ( Well, I can’t say that we miss you ), before Dawn calls Don for a meeting in the conference room, with the partners. So this is it. Cooper announces that SC&P wants Don back, but under certain stipulations: He’s not allowed to be alone with clients. He has to stick to a previously approved script in meetings. And unless he’s welcoming a client, Don can’t drink at the office.

Where will Don be working? In Lane‘s old office, where the he killed himself. And, he will report to Lou. It’s humiliating, but whatever discomfort Don might be feeling is masterfully disguised with indifference and a hint of arrogance and disdain. Okay. Bobby said it best: I wish it was yesterday.

•  I like Betty, and we got some interesting and funny moments from her, but I wish it was clearer where her character is heading, and how it relates to the rest of the plot. Because at this point, her relevance is hard to see – and I don’t want that for her.

•  Gotta admit I was a teeny bit happy when Megan broke up with Don. But the make-up phone-call was too well-written and too well-acted to wish it didn’t happen.