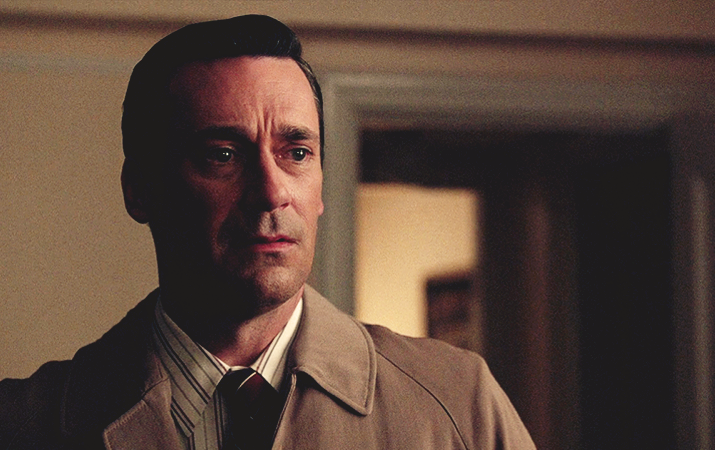 It happened, readers. The thing I’ve been dreading for years, the day I wish would never come – it is here, and it hurts so bad: Mad Men has reached the 70s. Sideburns, thick glasses, ruffled shirts, moustaches, freaking corduroy. Joan wants to burn down McCann Erickson? I want to burn down Roger’s closet. And his moustache. Thank god Don is a fashion monolith – I don’t think I could handle him in flared pants.

But if Don’s looks remain timeless, unchanged, the same cannot be said about his personal life: with a second divorce underway, Don is free to seduce young, beautiful women and taking full advantage of it. The man, the mystery, the voice – it’s all back, and yet it’s not the same.

Those seventies girls may drop their fitting rompers at the sight of Don Draper, but we’ve seen too much by now to buy it. And as Peggy Lee asks if this is all there is to love and life, her words echoing his emptiness, it would appear that no amount of money or women can make Don buy it either.

Mad Men returned as metaphysical and symbolic as ever (so much that half the fun is still going through all the connections and theories afterwards), with the theme of life’s meaning weighting heavily in this week’s episode, Severance.

In fact Don gets eerily close to death again: in yet another cleverly dubious scene, Don dreams about Rachel Katz shortly before Meredith tells him he can’t meet with Rachel on Monday after all, because she’s been dead for a week. Just like that.

Talk about a punch in the stomach. Especially because since I started re-watching the first season, Rachel is so fresh in my mind that I actually thought they could get back together. But Weiner made a point of throwing that hope right out the window, didn’t he? Thanks.

Also dealing with signs is our beloved Ken Cosgrove. On the day after his wife urges him to quit his job and work on his novel, Roger fires him. But instead of mourning the loss of his career, Ken sees it as fate – so he is meant to follow his dream and become a novelist!

That is until another, more satisfying sign comes his way, for this is Mad Men after all, characters don’t just ride off into the sunset. In that glorious scene where Ken rubs his new job in Roger’s face and let’s him know just what a pain in the ass he’ll be, Ken’s triumphant smile is only matched by our own.

On the ladies front, Joan and Peggy are struggling to thrive in a man’s world, and ended up lashing out at each other. Their storyline didn’t really appeal to me this week, except for Peggy’s date. It sure was nice to see her get a chance at love, after the sleaze fest that was Pete and Ted. Yet she falls back into denying herself that chance, tossing the whole thing aside the next morning. Why, Peggy?

Now, I needed that Ken bit before getting into this next subject.

In the episode’s best scene, Don attends Rachel’s sitting shiva and learns from her sister, who knew Rachel had an affair with him, that she had a husband, two children, happiness. A whole life without him. Don is crushed, on the verge of tears (Jon Hamm everyone), and Ken’s words take on a new meaning: a sign of the life not lived.

Severance | b+
written by Matthew Weiner
directed by Scott Hornbacher