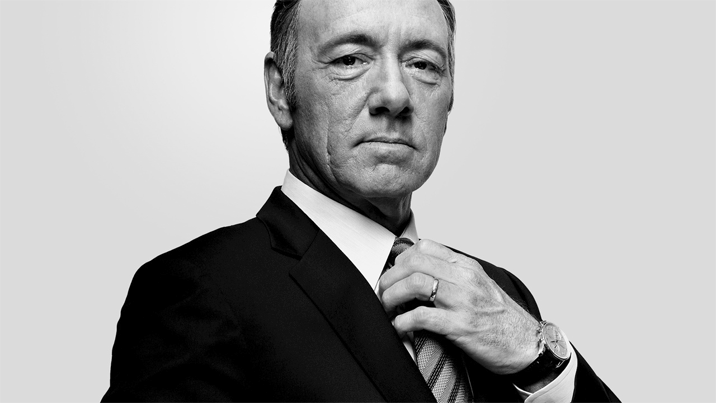 These last two weeks we’ve said excited see you soon’s to many tv shows, and a tearful, slightly irritated farewell to a show they say defined a generation, How I Met Your Mother. On that subject, I’m halfway between disbelief and understanding, but whichever side you’re on, you can expect an alternative ending to be released on DVD.
There was also the Suits finale (interesting, but hopefully will pick up its charm in the next season), the Shameless finale (astoundingly good show that hasn’t got the recognition it deserves for unexplainable reasons), and the Brooklyn Nine-Nine finale (funniest show on air, come back soon please).

— spoilers ahead —
For me this was also the week I finished watching the second season of House of Cards. Just when I thought the show couldn’t get more shocking, Frank has a threesome. Yeah that’s right. Then he becomes president, and tops it off with a chilling double-tap on the Oval Office’s desk – which made it my favourite season finale so far.
— it’s safe again —
It got me thinking about Kevin Spacey – that’s when I stumbled upon a surprising article in The Hollywood Reporter: he talks about the show, his passion for tennis, not accepting small roles, letters from Katherine Hepburn, and his upcoming role as Winston Churchill. Here’s a direct quote: I’m not interested in elevating someone’s crap movie.
Still with six episodes left is Hannibal. I don’t know how many times I can praise this show without getting boring, it’s just that it is so. damn. good. Mads Mikkelsen gives a little season finale tease for the Huffington Post: Without saying too much, I can say we all had to take some long, hot physical showers to wash all the blood away. What happens to who I will not reveal, but it’s going to be a mess.

In other news, Stephen Colbert will replace David Letterman as host of the Late Show, next year. There are now hundreds of articles praising the Colbert Report, remembering its finest moments so far, and rooting for Colbert’s success as a late night show host. I’m sad to see his brilliantly hilarious onscreen persona go, but I’m glad things are working out. And I’ll never skip the intro again. Also, Robert Downey Jr. joined twitter.

There’s a movie I’ve been wanting to see for a long time, especially since finding Bobby Darin, and this week I seized the opportunity to do just so – it was Beyond the Sea, a 2006 biopic of Darin, starred and directed by Kevin Spacey. The film itself is okay, but the Spacey’s performance… beautiful. Forget the acting, the man does all the singing, sounding unbelievably close to Darin himself. It’s a wonderful tribute that any fan should see.
Another great discovery was What Maisie Knew – as soon as I saw the first few minutes, I was hooked. Lastly, I saw Captain America: Winter Soldier. I wasn’t blown away by it, but it was very entertaining. Be sure to catch our next podcast episode to know all about it!
As soon as I finish Revolutionary Road (heated arguments never sounded so good), Lolita (why is it taking me so long…), and Before the Fact (starting tomorrow), I’ll dive into Gone Girl. Here’s the sneak peak, and the trailer of the new Philip Seymour Hoffman movie, A Most Wanted Man.
new upcoming events
– I’ve got a new web event on my schedule, and that is A Fistfull of Film‘s God is in the Movies blogathon. I wanted to contribute with the series The Bible, since it stars a portuguese actor as Jesus, but I’m not sure I can finish watching it by Thursday.
– This is the month of Aronofsky on French Toast Sunday – be sure to participate!
– April is also Hitchcock Month on Film Flare: I’ll be dedicating numerous articles to the director’s work, and finish watching his most important films.
– Another event on the blog is the beginning of Mad Men‘s final season, tomorrow. TOMORROW. There will be recaps, rewatches, and overall gushing about the greatest show every made about nothing. Just kidding, we all now what that show is about. I found a Mad Men college course (this is real), and will go through the recommended reading until the show ends, seven weeks from now… next year.
the best from the web
– Game of Thrones is back, and if you’re a fan give yourself a treat and head on to Sati’s blog.
– And if you’re having trouble putting the awesomeness that The X-Files was behind you, Sheila shared an hilarious interview with David Duchovny and Gillian Anderson that will not help you with that.
– Mettel wrote a compelling piece on her movie passion.
– M. Brown reviews Captain America: Winter Soldier.
– Check out this video on some of the best cinematography of the 21st Century.
– And this article on how Mickey and Ian are the most important gay couple on television