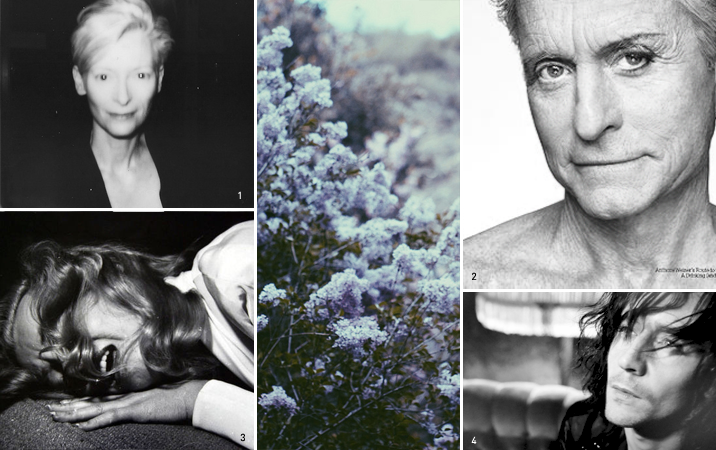 Tilda Swinton at the Berlinale | 1
Michael Douglas on the cover of NY magazine | 2
Marilyn Mornoe photographed by Philippe Halsman | 3
Tom Hiddleston in Only Lovers Left Alive | 4
This week was quite the change in terms of what I watched: I purposely ditched some tv shows (mostly comedies), leaving them for summertime – though still eagerly catching up with House of Cards – and made a conscious effort to see a couple of movies from 2013 I had yet to watch. They were Philomena, Enough Said, and Behind the Candelabra.

The last two were especially surprising. The late Gandolfini and Seinfeld actress Louis-Dreyfus brought to life the lifelike and hilarious script by Nicole Holofcener (Please Give), while Douglas and Damon live up to the hype with two brave and notable performances.

However, the favourite movie of the week was Jim Jarmusch’s hypnotising vampire tale, Only Lovers Left Alive. Everything was worth liking in this one, from the enigmatic atmosphere and the actors’s work, to the enthralling story and set design. It has some interesting lines, and somehow, amidst all the supernatural humour, it told something about life.

And that was about it for the past seven days, with any musical findings coming from the previously written about soundtrack of The Wolf of Wall Street. I need to give The Deep Blue Sea another go, because I couldn’t get past the shrieking violin the first time around; I’m also hoping to see The Monuments Men tomorrow night, while on Sunday we chicks will have our next recording for the podcast, with a special guest – so stay tuned for a new episode next wednesday.
TITLE: from a Shakespeare sonnet, quoted in Only Lovers Left Alive
this week’s best from the web
– Amy Adams expressed her feelings towards PSH on Inside the Actors Studio.
–  Esquire journalist Tom Junod wrote a piece called The Moment Leonardo DiCaprio Became a Man. I still haven’t finished reading it, but I’m linking it anyway because of obvious reasons.
– Producer Michael Patrick King thinks there’s one chapter left on the Sex and the City story. I’m not especially happy about this one.
– Mette continues her epic Harry Potter journey, writing about the Prisoner of Azkaban.
– Elina listed 20 things she loves about Game Thrones.
– Nell shares her thoughts on the brilliant Shame.