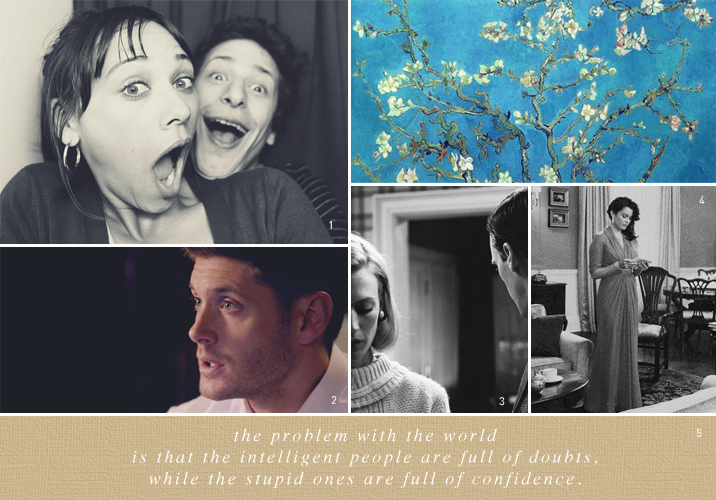 Still from the film Celeste and Jesse Forever | 1
Jensen Ackles as Dean Winchester, in Thinman | 2
Still from Mad Men | 3
Mellie in We Do Not Touch the First Ladies | 4
Quote by Charles Bukowski | 5

I’m posting links two days later because this is the third time I’ve tried to write this post. The first time, I began writing about the movie Celeste and Jesse Forever (re-watched it last Tuesday) but my writings started to resemble a review. Saved it, draft. Since Supernatural was getting so much backlash, I thought I’d start with that instead. Three paragraphs in, it was clear I was writing an article about the episode – which I never do, oddly. Saved it, draft. Now I’m a bit scared to get into any topic, so I’ll just pick something that never inspired me to write much: Glee!

Am I the only one who still watches that show? Sure, I skip most of the musical numbers since they now happen for no reason. And yes, I don’t feel all that interested in what goes on at McKinley High but hey, remember the new Rachel? NYADA? I wish there was a spin-off about her and that school, in that city. Can you imagine? It would be like a modern Fame, and I would not miss a beat of that show. I gonna watch some 80s dance musicals, now.

Another show that I still watch for no reason… Grey’s Anatomy. Sometimes I wonder if I just like staring at their beautiful faces. Ten seasons. It’s gone too far, to the point of no return. To stop now would just be a waste, right? This is Sandra Oh’s last season. Does that mean she and Owen are going to die a la Lexi and Sloan? They’re the only thing I still treasure about the show, but the sad thing is… I wouldn’t stop, not even then. Anyway that’s not happening, according to THR. But this quote seriously worries me: It’s our intention to have Grey’s on the air for many years to come, with as many of the original cast as possible [ABC]. What.

On other, happier news: it was Mads Mikkelsen week: rewatched The Hunt (like fine wine), caught the newest Hannibal episode, and promoted him to March’s banner motif. So did you catch the last episode? I could barely look at the screen, some scenes were really, really horrific. Loved it.

Finally, Scandal is back. I’ve talked about the show’s banal development of the Fitz/Olivia affair. I mean, door closed? What is this, Beautiful Bastard*? But We Do Not Touch the First Ladies was much, much better – anything involving Mellie is bound to be great, and if there’s one thing we all need is for the president to take off his shiny armour more often. I swear the best moments are when his flaws are out for everyone to see. Remember when he actually killed an old lady? Awe-some. Also, THIS.
*oh yes, I read that thing in two nights… je suis à toi (cringe).
check out my goodreads account in a few days for a review!
the best from the web
– LOTS of Oscar Specials!! Here’s everything you need to know by Nikhat, Sati, Katy, and Andina.
– Sati also wrote a whole post dedicated to the delicious McConaissance. Good stuff.
– After applying to Erasmus in Paris, I am addicted to Four Months is Paris‘s instagram. Plus anything Barcelona and Rome. Can 2015 be here already?
– Reviews of Wes Anderson’s The Grand Budapest Hotel are popping up everywhere.
– This blog is sheer, shameless, and gratuitous eye candy. Every day. And he shared the most interesting article I’ve read in a long time, where JLaw’s oscar date writes about the biggest night of the year. took me a looong time to realise it was on myspace.
– Ryan shares a great quote by Tilda Swinton about cinema.
– Sheila continues her journey through Supernatural recaps!