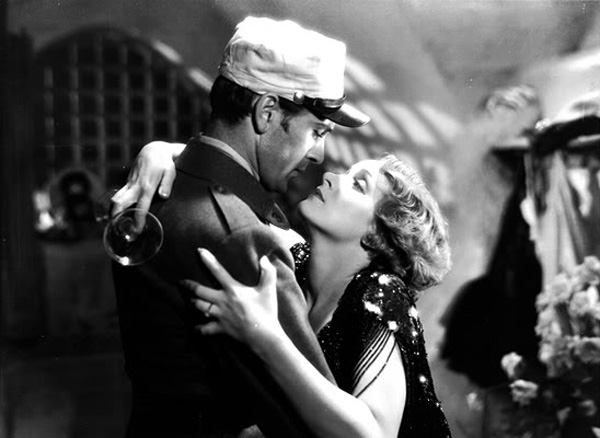 Legionnaire Tom Brown (Gary Cooper) and cabaret singer Amy Jolly (Marlene Dietrich) meet in Morocco, both running from their previous lives and distrustful of the other sex: he’s a classic womanizer, she is emotionally hurt and consequently detached from men. There’s also a rich man with a pompous name (Adolphe Menjou) who is interested in her and keeps getting in the way. But he doesn’t really matter; not when two now legendary actors fall in love in an exotic setting. I myself am beginning to fall in love with these little affairs between Dietrich and her boy toys, who happen to be favorite actors of mine (first Grant, now Cooper, perhaps Stewart is next). Her dominance over them may not be as self evident as say, the one of Mae West, but it is there nonetheless, in the sheer intensity of her being which hypnotizes both men and women.
But her co-star is not far behind. In 1930, Gary Cooper had one exquisite onscreen presence (and face – further evidence). He was young, irreverent, and devilish — the kind of man who should come with a big and brightly colored warning saying “faint-hearted women – stay clear“. Quite different from the honest american John Doe we’d come to admire years later, but every ounce as alluring. Still, he does make room for the ever-haunting Marlene Dietrich: a nonconformist german beauty, baffling audiences with her manly suits and lesbian kisses, setting trends that would resurface decades later. But this tremendous act of confidence and total control is merely hiding an unspeakable sorrow that has pushed her to buy a one way ticket to Morocco, but didn’t stop her, fortunately, to believe in her heart’s desires. 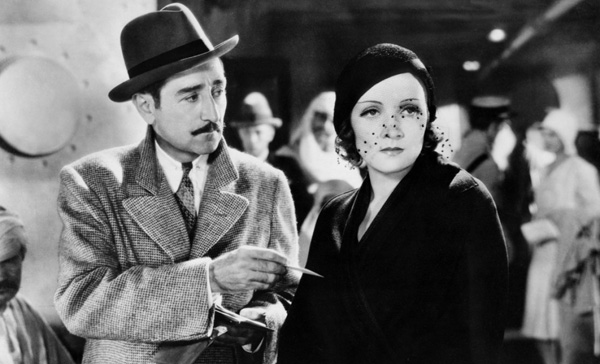 Their affair begins as a cheeky flirting game — she’s on stage teasing, he’s in the audience craving — but when they are finally in a room all by themselves it is clear that a deeper connection will follow. There’s a mutual fascination that craves for discovery, but there’s not enough trust to take the necessary step forward. But lust overcomes them and they kiss. That special kind of climax particular only to movies from this era.
And if that kiss didn’t go down in history, it should have: he’s sitting behind her, she leans back and looks at him for a few seconds. He instinctively knows what she wants and acts on it. The kiss is electric and passionate, yet intimate. In fact, it is private: the moment their lips touch, he takes a fan and hides their faces behind it, leaving us out in the cold, baffled, and utterly entranced with what we cannot see, but only imagine. And the imagination weaves a better kiss than images could ever compose.
What I just described is the starting point of a period of longing and torment which both actors carry out beautifully, leading up to a surprising ending.

Sydney Pollack Blogathon: from Hitchcock Presents to Will & Grace