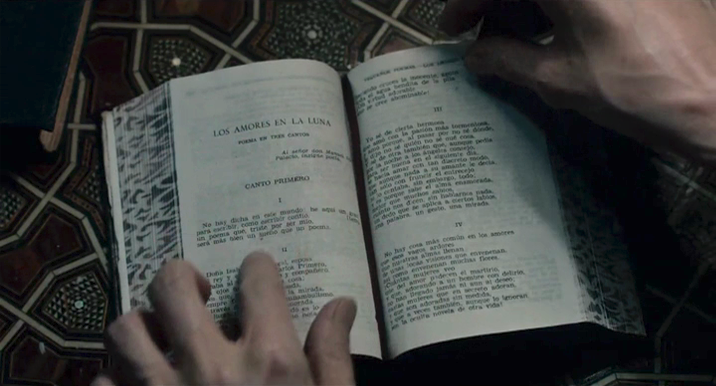 HAMM: Did you ever see my eyes?

CLOV: No.
HAMM: Did you never have the curiosity, while I was sleeping, to take off my glasses and look at my eyes?
CLOV: Pulling back the lids? (Pause.) No.
HAMM: One of these days I’ll show them to you. INFINITE JEST
by DAVID FOSTER WALLACE, 1996
Somewhere in the not-so-distant future, the screwed-up residents of Ennet House, a Boston halfway house for recovering addicts, and students at the Enfield Tennis Academy search for the master copy of a movie so dangerously entertaining that its viewers die in a state of catatonic bliss. Explores essential questions about what entertainment is, why we need it, and what it says about who we are. more
DON QUIXOTE
by MIGUEL DE CERVANTES, 1605
Don Quixote has become so entranced by reading chivalric romances, that he determines to become a knight-errant himself. In the company of his faithful squire, Sancho Panza, his exploits blossom in all sorts of wonderful ways. While Quixote’s fancy often leads him astray — he tilts at windmills, imagining them to be giants — Sancho acquires cunning and a certain sagacity. Sane madman and wise fool, they roam the world together, and together they have haunted readers’ imaginations for nearly four hundred years. more
THE TEMPLE OF THE GOLDEN PAVILION
by YUKIO MISHIMA, 1956
In The Temple of the Golden Pavilion, celebrated Japanese novelist Yukio Mishima creates a haunting portrait of a young man’s obsession with idealized beauty and his destructive quest to possess it fully.
Mizoguchi, an ostracized stutterer, develops a childhood fascination with Kyoto’s famous Golden Temple. While an acolyte at the temple, he fixates on the structure’s aesthetic perfection and it becomes his one and only object of desire. But as Mizoguchi begins to perceive flaws in the temple, he determines that the only true path to beauty lies in an act of horrific violence. more
THE BASTARD OF ISTANBUL
by ELIK SHAFAK, 2006
In her second novel written in English, Elif Shafak confronts her country’s violent past in a vivid and colorful tale set in both Turkey and the United States. At its center is the “bastard” of the title, Asya, a nineteen-year-old woman who loves Johnny Cash and the French Existentialists, and the four sisters of the Kazancı family who all live together in an extended household in Istanbul: Zehila, the zestful, headstrong youngest sister who runs a tattoo parlor and is Asya’s mother; Banu, who has newly discovered herself as a clairvoyant; Cevriye, a widowed high school teacher; and Feride, a hypochondriac obsessed with impending disaster.
Their one estranged brother lives in Arizona with his wife and her Armenian daughter, Armanoush. When Armanoush secretly flies to Istanbul in search of her identity, she finds the Kazancı sisters and becomes fast friends with Asya. A secret is uncovered that links the two families and ties them to the 1915 Armenian deportations and massacres. Full of vigorous, unforgettable female characters, The Bastard of Istanbul is a bold, powerful tale that will confirm Shafak as a rising star of international fiction. more
BASQUIAT
edited by SAM KELLER and DIETER BUCHHART, 1996
See Also
Movies

It’s the one under the other books. Read this to know more about it! 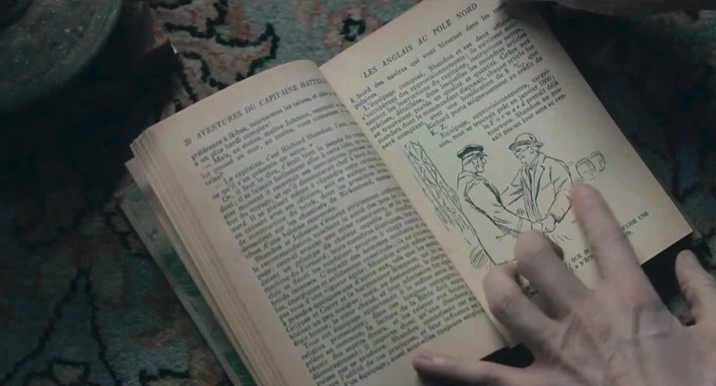 LES ANGLAIS AU POLE NORD
by JULES VERNE, 1864
The English at the North Pole was originally published in 1864, being begun even before Verne’s Journey to the Center of the Earth. This vigorous Arctic tale was used to found and introduce a “Magazine of Adventure,”which was continued for some years. The book contains an accurate picture of Arctic life and of the Arctic geography known to the world of 1864.
The account of the Franklin expedition and of the persistent and heroic search for its relief is carefully studied and complete, only it necessarily fails to include the later investigations of the American expedition under Lieutenant Schwatka. These finally settled the last details of the historic tragedy. more 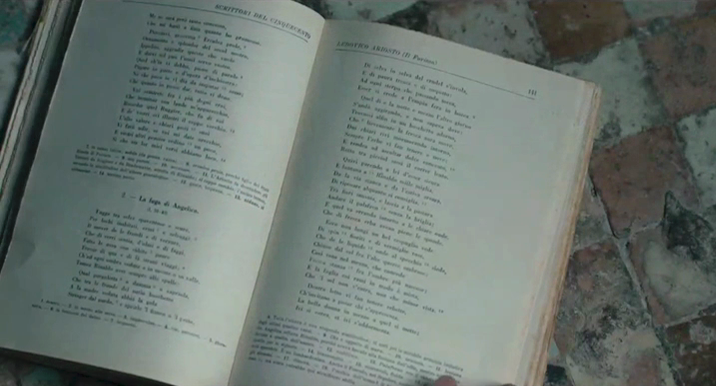 L’ORLANDO FURIOSO
by LUDOVICO ARIOSTO, 1516
I’m guessing this is the right poem. The action takes place against the background of the war between Charlemagne’s Christian paladins and the Saracen army that is attempting to invade Europe. Ariosto has little concern for historical or geographical accuracy, and the poem wanders at will from Japan to the Hebrides, as well as including many fantastical and magical elements (such as a trip to the moon, and an array of fantastical creatures including a gigantic sea monster called the orc, and the hippogriff).
Many themes are interwoven in its complicated episodic structure, but the most important plot is the paladin Orlando’s unrequited love for the pagan princess Angelica, which develops into the madness of the title. After this comes the love between the female Christian warrior Bradamante and the Saracen Ruggiero, who are supposed to be the ancestors of Ariosto’s patrons, the d’Este family of Ferrara. more 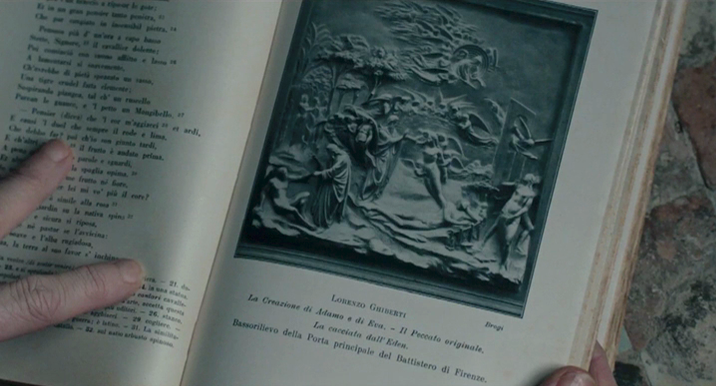 Frank Kafka’s The Metamorphosis (1916) is also visible at a later point, on the suitcase.

There are still some unknown books – help me identify them in the comments!
all synopsis were taken from Goodreads or Wikipedia