I’ve never been a religious person; I attended several catholic schools, learned the bible (kind of, not really), and went through all the traditional rituals, but I always lacked what you call faith. I don’t know if people are born with it, or if at some point it just happens – I simply never had it. Thus any literal depiction of God or other biblical happenings in films strike me as historical or fantasy movies, and don’t normally have an impact on me.
So for this blogathon I could’ve just chosen my favourite biblical movie, praised its cinematic achievement, and leave it at that. But since religion is about life, something that matters to us all, I figured an honest pick would be a film that despite not being biblical, does have God in it: The Tree of Life. 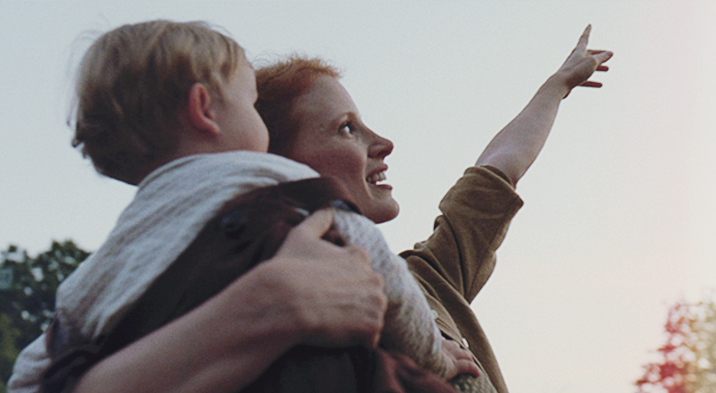 I’ve reviewed this movie back in 2012, so I’ll simply focus on God’s presence here – or rather, the lack of it. What immediately moved me about The Tree of Life was the injustice that fell upon the O’Briens. They, devoted christians, had their son taken from them; something that in their eyes was act of God, or at least something he allowed to happen. How could He be so cruel to someone who had done nothing but love Him? Devote himself to Him? These questions are answered in the Book of Job, the story that inspired Malick to write The Tree of Life, which I explain in my review.

There’s also the struggle between good and evil (or grace and nature) – two opposite forces respectively embodied by Mrs. and Mr. O’Brien – that finds its bloodiest battlefield in Jack, one of the O’Brien sons. This quote has stuck with me since first hearing it: Father. Mother, Always you wrestle inside me.
But these are not definite categories; she’s not just good nor he just bad. In fact, by the end of the movie, Mr. O’Brien is very much aware of what he has done: I wanted to be loved because I was great; A big man. I’m nothing. Look at the glory around us; trees, birds. I lived in shame. I dishonored it all, and didn’t notice the glory. I’m a foolish man. Another striking line, because Malick’s film is also about how beautiful life is, both ours and the one that surrounds us, and how easily it can be disrupted – we all walk a fine line between good and evil, and most of time our worst sin is blindness.
So where is God in all of this? That’s up to you.
you can read my thoughts on all of this at length, in this post
do you have a favourite cinematic depiction of God?